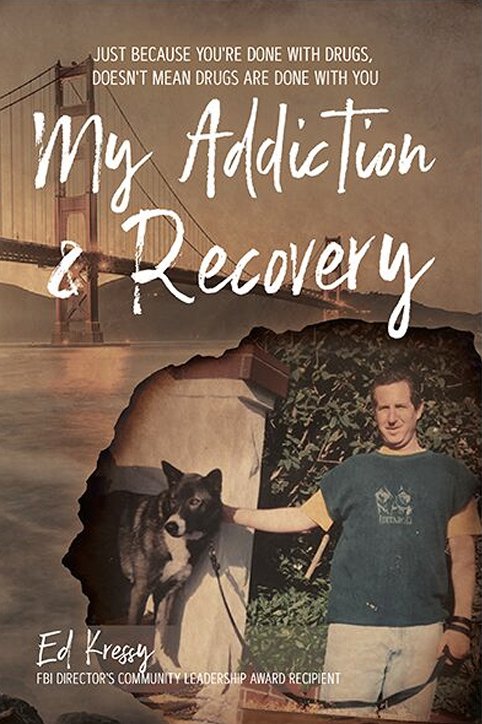 “Just because you are done with drugs, doesn’t mean drugs are done with you”
Addiction & Recovery inspires readers with an amazing story of transformation and rebuilding one’s life. A timely reminder that people can overcome addiction, mental health challenges, and criminal histories to make solid contributions to society. Through one recovered addict’s firsthand account of how incredible people motivated him to do the hard work of making positive changes, readers will glimpse hope for the lives of others and for their own lives as well.

Growing up in a small New England town, Ed Kressy’s love for reading and flights of the imagination set him apart from other kids. Though bullied and ostracized, he found a way to connect with others through writing. During his teenage years, he found another, easier way: drinking.

In college, heavy drug use fueled Ed’s further escape from reality and the pain that stemmed from self-hatred and neglecting his dream of becoming a writer.

By his his early thirties, Ed had attained goals: a career with a firm which went on to be named Fortune Magazine’s “Best Company in America to Work For”; a hobby competing as an amateur kickboxer; and home ownership in San Francisco. Yet a disastrous methamphetamine addiction led him into psychosis, destitution, and months behind bars.

Meth psychosis immersed Ed in a terrifying false reality in which the FBI architected a vast conspiracy with him at the nexus. Sure that his family and friends were in it, and afraid to seek help, he toted a pistol for protection, stole and cheated welfare to survive, went months without showering or brushing his teeth. Finally, eleven years after becoming addicted to meth and having thrown away almost everything, Ed took one of the few remaining options left: he got clean.

Ed finally achieved his dream of being a writer. His work has been published in The Washington Post, Vox, and the San Francisco Chronicle. His weekly newsletter, Meditations on Meth entered its second year of publication in June 2019 (past issues available on Ed’s Medium blog site). He speaks regularly at Toastmasters, having twice progressed to the highest level of speech competition within his district, comprised of about 140 Toastmasters clubs. Ed has delivered talks for entities such as MIT, Cisco, Google, LinkedIn, The Moth, Amazon, Slack, Hack the Hood, Decker Communications, One Salon, faith-based organizations, and others.

Addiction & Recovery opens doors for readers to deepen their faith in human resiliency and spirit, and the benefits to society that are possible when we give helping hands to those who are overcoming some of life’s most challenging obstacles

Although provided with much of the best society has to offer-college education, a career with a leading biotech firm, and home ownership in San Francisco-Ed failed to pursue his dream of becoming a writer for decades. In his youth, writing was a means of escape from bullying and feelings of isolation. Yet, starting at age fourteen, he found a quicker, easier means of escape: drinking. Heavy drinking led to drug use, which spiraled into cocaine and meth addiction. In 2007, at thirty-seven years old, Ed found himself at the tail end of a four-year meth run, during which he’d spent months in jail, thrown away all his material possessions, cut himself off from all his relationships, and lost his dog. Meth psychosis had led to crushing paranoia around the FBI. For years, his lifestyle revolved around navigating his psychosis and engaging in daily criminal activities: drug possession, carrying firearms, theft, damaging property, and defrauding the government by nonpayment of taxes and cheating public welfare systems. Finally, cut off from all his resources, with few choices remaining-other than long-term homelessness, institutionalization, or death-Ed got clean. But he discovered that just because you’re done with meth, doesn’t mean meth is done with you. He continued to experience episodes of FBI paranoia and a schizophrenia-like condition. Fortunately, compassionate people inspired him to adopt a spiritual life of giving to his communities, pursuing his dream, and overcoming fear. Today, Ed puts forth messages of hope for people overcoming addiction, criminal histories, and mental health challenges. Since 2015, he’s been part of Defy Ventures as a program graduate, employee, volunteer, and advocate. In July 2017, he spent a three-day weekend volunteering in Pelican Bay State Prison, the only supermax state prison in California, as a member of the Pelican Bay Volunteer Alliance (PBVA). Both Defy Ventures and the PBVA are nonprofits that train currently and formerly incarcerated persons in transformational skills related to entrepreneurism, employment, and personal development. Ed continues to support both organizations by volunteering inside prisons, attending monthly business coaching and community-building events, and advocating for the organizations. Since April 2017, Ed has co-facilitated a weekly Toastmasters-style meeting in a women’s unit of San Francisco County Jail. The “Breadwinners” group helps the women appreciate and learn communication skills to advocate for themselves and achieve their full potential of contributing to society. Incredibly, Ed became a volunteer for the FBI. After earning certification as an instructor of Krav Maga, the Israeli self-defense system, he led an unarmed self-defense session for an FBI SWAT team. From there, he was nominated to attend the selective FBI Citizens Academy. In May 2019, at a ceremony at FBI headquarters, the director of the FBI recognized Ed with a Community Leadership Award. Today, Ed assists Bureau outreach efforts to those affected by addiction and incarceration. He is helping launch a project to identify ways the FBI can support people released from incarceration avoid recidivism. His fears of the FBI have been dispelled. Ed’s work has been published in The Washington Post, Vox, and the San Francisco Chronicle. His weekly newsletter, Meditations on Meth, entered its second year of publication in June 2018. He speaks regularly at Toastmasters groups and is beginning a focused campaign to follow up on successful talks and trainings he’s delivered for organizations such as MIT, Cisco, Google, LinkedIn, and others. He regularly appears on podcasts and blogs and at community and corporate speaking events to inspire readers with his message of advocacy. Ed is continuing a fitness fundraiser for the Wounded Warrior Project, a nonprofit that assists injured veterans. His fundraiser, Burpees! For Wounded Warriors, has raised almost $3,000 for the organization. Ed believes it’s always worth it to give someone-including yourself-a second chance. Even from the depths of addiction, psychosis, and criminal activity, it is possible to transform into a person who makes positive contributions to society.

← The Offline Dating Method The Apprentice Billionaire’s Guide to Profits →